Local WebTV Network for Cardiff and Vale of Glamorgan
While the Government and TV Broadcasters consider the development and funding of a Local TV Network following the Ofcom and Shott reports, the ‘Broadband Wagon’ continues to pick up more and more passengers seeking alternative sources of customised information, localised news and original entertainment. The culture secretary’s recent speech emphasised the need for a TV Network that takes into consideration more localised news and content. It is hoped that Local TV Networks will begin to materialise in 2013. 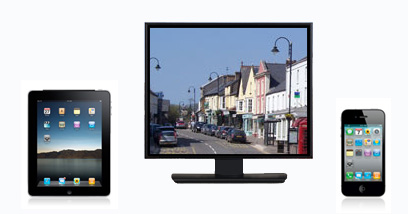 Meanwhile, downsizing and rationalisation in the traditional TV industries has led to a large pool of talented individuals with considerable experience and knowledge in the production and presentation of media content in all its formats. Standardisation of software, browsers, video and music formats makes the mass distribution of rich media content a viable proposition. Whilst there may be limitations in terms of large screen quality for those without high speed broadband, it could be argued that with the increasing use of ‘smaller screens’ such as ipads. iphones, notebooks and laptops for accessing entertainment and information, the quality is already more than acceptable. Continued investment in broadband delivery and speeds will also improve this quality.

The popularity of YouTube, Vimeo and iTunes as sources of entertainment is clear, but the searching out of content that meets the user’s preferences and standards can be a time consuming process and reduces actual ‘leisure time’. Traditional TV has always provided immediate access to a choice of content, a percentage of which may even satisfy the viewer’s personal interests at that viewing session. If not, then the viewer may switch off the TV and use the internet to catch up on favourite entertainment programmes using the various i-players.

To provide a user interface that provides immediate access to a choice of original entertainment and local news based upon the needs and preferences of viewers in a specific locality, through social network feedback for example, presents an interesting opportunity. An opportunity now being developed by Scott Manning Associates as a project called ‘A Local TV Network for Cardiff and the Vale of Glamorgan’. Its main aim being to utilise available local creative talent and technical expertise to produce and deliver an updated programme of local news and entertainment via the internet. If anyone is interested in becoming involved in the provision and presentation of original content please get in touch on 01446 771220 or via our social network links.

Links to reports mentioned in this article

Find out more or adjust your settings.

This website uses cookies so that we can provide you with the best user experience possible. Cookie information is stored in your browser and performs functions such as recognising you when you return to our website and helping our team to understand which sections of the website you find most interesting and useful.

Strictly Necessary Cookie should be enabled at all times so that we can save your preferences for cookie settings.

If you disable this cookie, we will not be able to save your preferences. This means that every time you visit this website you will need to enable or disable cookies again.